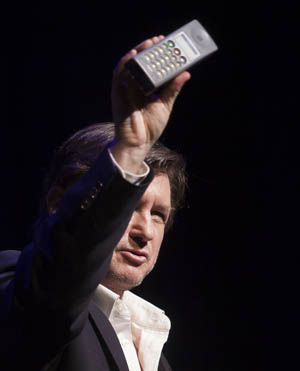 April 17, 2014 - One of the entrepreneurs involved in the security wizardry that became part of Apple’s iPhone 5S shared his story with Eastern Florida State College faculty, staff and students Thursday as part of the Simpkins Business Seminar for Entrepreneurial Development.

Speaking at the King Center for the Performing Arts, F. Scott Moody discussed his role in sensor technology that is part of the newest model of the popular smartphone, the backbone of which was conceived by the Melbourne company Moody co-founded.

The company developed the fingerprint sensor that is used to unlock the phone or make purchases online, making it an integral part in the lives of millions.

The idea led to AuthenTec, the fingerprint sensor company co-founded by the former Harris Semiconductor executive, being acquired by Apple for $365 million.

Moody began his career at Harris Semiconductor — now Intersil — in 1980, rising to become vice president of a $200 million division.

He left Harris and co-founded AuthenTec in 1998 after engineers talked to him about creating a fingerprint sensor that could be applied to a variety of devices.

That took Moody down a road that included raising more than $70 million in venture capital and growing AuthenTec into a company with 300 employees and development centers in Melbourne, FL, China and the Netherlands.

Moody, drawing deeply on personal experience that included struggles with finances and in the marketplace, urged potential entrepreneurs to boldly go forward and not fear failure.

“I don’t believe in failure,” he said. “They are not failures. They are experiences. You only fail if you give up. Start moving forward.”

He also counseled those in the audience to draw strength and inspiration from what he called their love of the game and offered tips to draw upon through what he called “a tremendous amount of hard work,” adding “the harder you work, the luckier you get.”

Moody also read a letter that he read as the eulogy at his father’s funeral and related it to re-defining entrepreneurship.

“It’s about making a difference,” he said. “What you do matters if you get your whys right.”

Now the Entrepreneur in Residence at Blackstone Entrepreneurs Network and the founder and director at First Talent Ventures, Moody was introduced by Eastern Florida President Dr. Jim Richey.

“You may not know his name, but millions of people around the world are using his former company's creation this very second: The fingerprint sensor on the Apple iPhone 5S,” Richey said of Moody.

“Scott took this good idea and ran with it, co-founding the sensor technology company that was eventually sold to Apple. He is an entrepreneur in the classic sense of the word, and one of the digital visionaries who is remaking our world.” 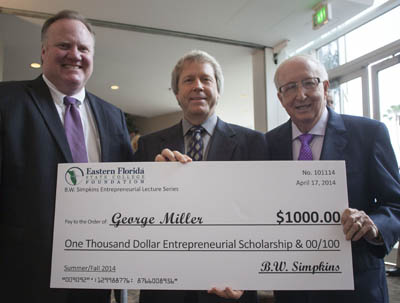 The Simpkins Seminars are named after Bernard Simpkins, a former member of the Eastern Florida State College Board of Trustees and the current chair of the EFSC Foundation Board of Directors who established an endowment to create the sessions. Since they began in 2001, the popular seminars have brought some of the nation’s top businesses leaders to the college.

The endowment also started the college’s Business Entrepreneurship Program, which was named the best emerging program in the nation in 2010 by the National Association for Community College Entrepreneurship.

As part of Thursday’s event Simpkins awarded a $1,000 scholarship to George Miller who graduated with a Certificate in Entrepreneurship Operations in December 2013 and is enrolled in the Associate in Arts degree program on the Melbourne Campus. Miller has a cumulative grade point average of 3.61.

Miller founded Miller Media Group in 2008, a non-profit television and video production company created for the advancement of Christian singer-songwriters and benefiting philanthropic organizations throughout the Space Coast.