September 20, 2016 - Entrepreneur and “Shark Tank” winner Chris Gilpin shared his made-for-television story of a lottery ticket that led to riches during two appearances on the Cocoa and Melbourne campuses Tuesday as part of the Simpkins Entrepreneur Series. 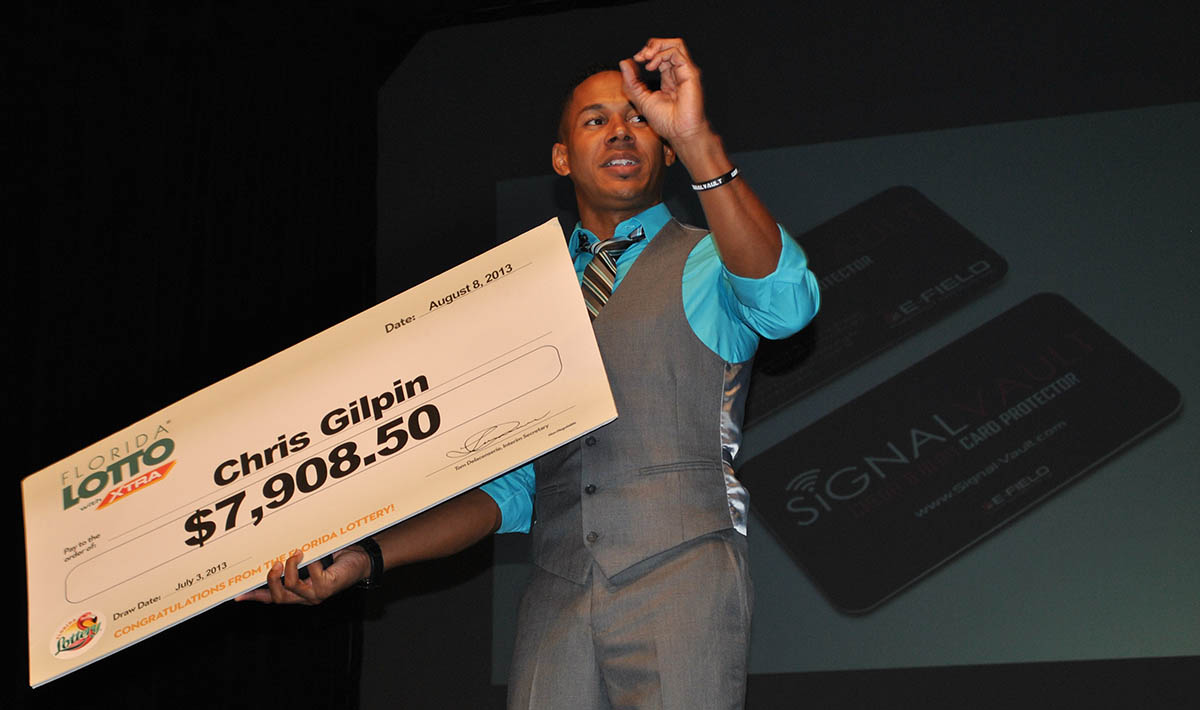 Speaking at EFSC almost exactly one year after ABC aired the "Shark Tank" episode that changed his life, Gilpin told audiences the fascinating story behind his success.

The Daytona State College graduate, who still lives in DeBary, FL said he was initially exposed to the concept of electronic pickpocketing as a public speaker for the National Crime Stop Program. When the preventative products on the market failed to meet his needs, he became an inventor.

His solution came in the form of a personal signal jammer that consumers can carry around in their wallets. A lucky Florida Lotto ticket provided the funds required to kick start his invention. In 2013, he invested all of his nearly $8,000 winnings to start his company, Signal Vault.

The investment was a timely one. Launching in the wake of Target’s well-publicized data breach, consumer demand for identity theft protection was high, and Signal Vault brought in $150,000 in sales the first year alone.

Eager to expand the product’s audience base, Gilpin auditioned for ABC’s Shark Tank during a Miami open audition in January 2015.

“While everyone else here has been pitching their ideas to you,” he told producers, “I’ve been stealing their credit card information.”

The memorable remark led to Gilpin’s selection for the show, where he presented his concept to actor Ashton Kutcher and others, ultimately securing a $200,000 investment from Shark Tank investor team Lori Greiner and Robert Herjavec.

As he shared his success story with audiences primarily comprised of business and finance students from EFSC and local area high schools, Gilpin’s advice to the young entrepreneurs was simple:

“Pursue your dreams. Go after things, even if someone says it’s not the best idea. If you have a dream or goal, no matter what it is, you’re going to have to work hard to get there. Success and sacrifice – I think they go hand in hand."

The EFSC business speakers series is named after college benefactor Bernard Simpkins, a highly successful Space Coast entrepreneur responsible for bringing some of the nation’s top business leaders to Brevard. 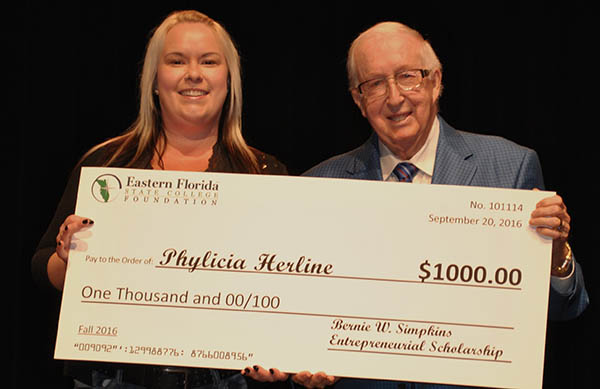 Each year as part of the series, Simpkins also awards the $1,000 B.W. Simpkins Entrepreneurial Scholarship. EFSC student Phylicia Herline, who's pursuing a business bachelor's degree, was the recipient at Tuesday's event.

“Everything I do is for my two young children,” she wrote in her scholarship application essay. “I’m a single mom. I am the breadwinner. I am a nurse, a nurturer and a teacher for my children, telling them every day to never give up on their dreams.”

Herline is the founder of Velveteen Entertainment, an Orlando-based company that books, promotes and manages local and national entertainment acts. Upon graduating from EFSC, Herline intends to pursue her Master’s degree and focus on further developing her company.

It's that entrepreneurial spirit and goal-setting that Gilpin calls the keys to success.

“No one ever got six-pack abs by reading about sit-ups,” said Gilpin. “You have to have a detailed plan and take action with that information. The goals you set for yourself now – if you keep pushing yourself, you’re going to surpass them by miles.”

Signal Vault has garnered more than $3 million in sales since its inception in 2013. The company is currently working to develop new products, as well as to secure additional retailers for the Signal Vault card.