Business Innovator Tells Students to "Think Big, Go For It"

October 22, 2019 - Suneera Madhani had a simple message Tuesday to students at Eastern Florida State College about how to achieve their goals: "Think big, and go for it." 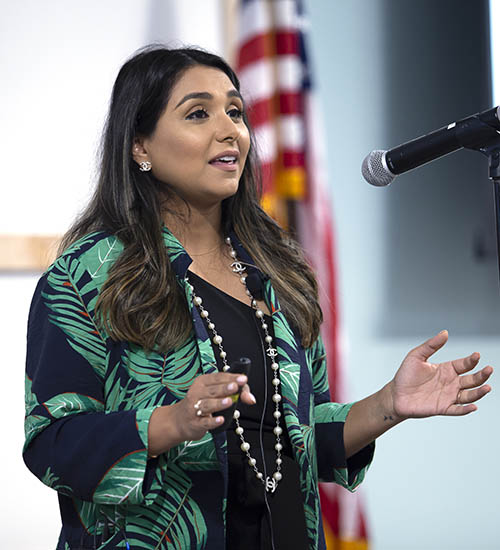 Madhani has done just that, disrupting the business payments and credit card processing system and making her firm, Fattmerchant, the talk of the business world.

She brought her story of innovation to the College as part of the Simpkins Entrepreneur Series, speaking before students on the Cocoa and Melbourne Campuses.

After graduating from the University of Florida with a degree in finance, Madhani started at a top consumer products company and moved into merchant services.

She left disillusioned with what she said was a system that made it as difficult as possible for businesses to use.

At first, her own plans on how to improve things fell flat.

"I took my idea and went to 12 different processors. I got no after no after no. It’s hard to be rejected that many times. After about the twelfth no, I was at my last resort," she said.

In 2014, she struck out on her own and started Fattmerchant, which stands for Fast Affordable Transaction Technology. It was a tall mountain to climb until "the company went viral" and success followed, she said.

Since then, she has raised $20 million in venture capital, seen triple-digit growth each year, expanded into multiple cities, hired 100 employees and handled $2 billion in transactions.

Her accomplishments have led Madhani to be named among Florida’s 500 Most Influential Business Leaders by Florida Trend, and CEO of the Year and Young Entrepreneur of the Year by the Orlando Business Journal.

Still, she is constantly looking for ways to improve, and cautioned against sticking too close to any plan.

"You can always be doing better. Really see yourself. Envision that inner leader we all have, and build the path to get there," she said. 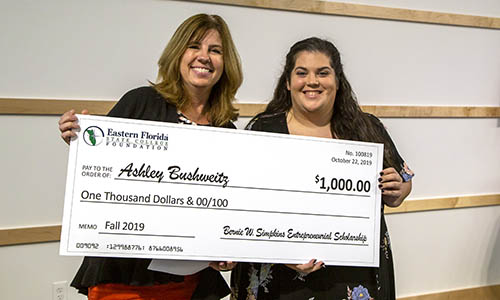 She is studying for her Bachelor Degree in Organizational Management with a focus in marketing and entrepreneurship.

Buchweitz wants to launch a non-profit organization to help students who are in foster care, or near aging out of foster care, to achieve goals of their own.

Her interest in the subject stems from personal experience within her own family and volunteer work she does at her church with teenage girls.

"There are a lot of great kids who just need some help navigating basic skills like personal finance, applying for jobs and going to college, but who don’t necessarily have the family support system in place," she said.

The lecture series is named after Bernard Simpkins, a highly successful entrepreneur and Space Coast business leader who established the sessions that have brought some of nation’s top business leaders to Brevard.

A Simpkins endowment also started the College’s Business Entrepreneurship Program to educate the next generation of business innovators.